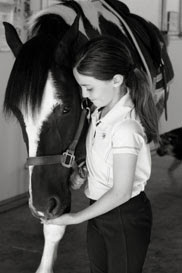 I have a question for you...Has anyone ever used an equine communicator? I have actually had a gal "talk," with our pony Monty and it was a pretty amazing "discussion."

Monty came into our family about a year and a half ago. He was fabulous. For seven months Monty was fabulous. My daughter took lessons from a wonderful teacher who is also a dear friend, but who is also a school teacher, so when she had to go back to her day job, she let us know that she had to back off of lessons and working with Monty. She was still able to do a couple of days a week, but I knew that with Monty being a new guy with us and with my daughter being small and although she'd been riding for a few years--she needed that extra attention. There was another trainer where we were at, at the time and I had watched him with some of the kids and thought he was pretty good with them, so I approached him.

Long story short--pony didn't like this guy. It wasn't long after they started working together that Monty had his first bout of colic, then Monty began to colic about every 3 weeks. Then he started doing things like bolting with his kid, and acting like a nervous wreck inside his stall. I started scratching my head wondering what the heck had happened to our fabulous pony?!?

My gut began talking to me, and my gut was saying there's something really wrong here. Monty colicked again, and at that point my vet looked at me and said, "Get him out of here, change everything about his program, or you might lose him."

There is so much more to the story, but it would be about ten pages long, so this is the short version.

Needless to say, I called up Terri (where we'd gotten Monty from, and she'd told me if there was ever any issue to bring him back and we'd figure it out). I told her the problem and within twenty-four hours we had the horses at her place.

Monty and my mare Krissy have now been at Terri's for a year--and guess what? Not one colic, no silly pony shenanigans to really pique the fear factor for the kid or me.

So back to the equine communicator. This gal came to "talk" to the horses not long after we got up to Terri's. She had no prior knowledge of Monty and the issues. We told her we were concerned that Monty had had a tendency to get fast with his kid. That was it.

She wrapped her arms around the pony and after a few minutes looked at us and asked, "Who else rides him besides the little girl and Terri?" We said that I did and occasionally another working student (a young woman). The communicator said, "No. The man, who is the man?" She looked right at me and a shiver went down my spine. "You know who I'm talking about," she said. I nodded. "Yeah well, the pony doesn't like him and is afraid of him, and he has reasons to be." Now--there is still a lot more to this but for time sakes, I'll keep to the short version. Then she wrapped her arms back around him and asked all of us (my vet included here) to send him light and love and let him know how much he's loved. All of a sudden this lady begins sobbing. I mean--totally sobbing. We were all looking at each other... She apologized and explained that this happens about once a month with a horse. She told us that he had just let go of a ton of grief. That Monty never understood that he was anything more than a commodity. He never understood that he could be or was loved. Now maybe this sounds crazy to you, but this is what I can tell you happened afterward:

Up to this point Monty was never affectionate. He did his job but he never seemed happy. He didn't seem to care if his kid was there or not. He just did what he was supposed to do and that was that. The communicator told us to constantly talk to him and tell him how much he is loved and that he is now a part of a family and will always be a part of our family, because he had a fear that we weren't going to keep him. I did this with him for a week straight, and the most amazing thing happened after that week. I was in the barn with him by myself and I took him off the cross-ties, and removed his halter to put the bridle on. All of a sudden, Monty just placed his head right in my chest and stomach. He just stayed like this with me for at least a minute or longer. Then he very gently (not pushy at all) rubbed his face on me--it was like when a cat rubs on you, not when my silly mare pushes me all over the place. I scratched him between his ears and told him hown special he is. And I swear he sighed. It was like this moment of true understanding for him--as if--"I get it. I'm part of the family." Since that day, as soon as he sees his kid or me, he jogs on over, he lets out a little nicker, he paws on the ground until we make it over to him, and it's obvious he feels like he is loved.

Both Monty and his kid are thriving together. He has been off his ulcer meds for four months now. He's fat and happy (maybe a little too fat), and he's settled.

Now I don't know your feelings on people who communicate with animals but I have to say that I am a total believer. I really believe that the lady who came and talked to Monty helped him and us a great deal, and I am really grateful for that.

Call me crazy or tell me if you've ever had anyone "talk" to or with your horse(s), and if so, what was the experience like? What was the outcome?