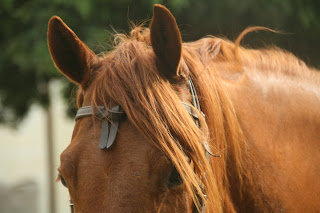 Today I wanted to touch upon the good and special things in horses. Three weeks ago I was kicked by a friends horse three times. My six year old quarter horse "Finally" (got his namesake by being born a month late) was tied up across from the horse that nearly took my life. After I was kicked, and when they had pulled the offending horse clear of everyone, there was an attempt to move all of the other horses out of the way to make room for the ambulance. My horse stood stock still, parallel to the trailer, eyes fixated on me. Several concerned friends tried to move him and he refused, not rudely, but with an air of determined calm resistance. He knew that I was hurt and was not going to leave my side. Eventually it proved more productive to move me, and only then did Finally allow someone to lead him to a nearby trailer, where he was tied up next to one of his friends, a 3 year old paint. The ambulance arrived quickly. It's flashing lights caused every horse within sight to freak out, every horse that is except for Finally and his young friend. Both stood absolutely calm and still, keeping their eyes on me. I had no clue that I had just been kicked by a horse, or why I was being held down by friends. At that moment, the only thing that I could remember was that a horse had tried to kick Finally. Over and over, I repeatedly asked if Finally was okay. Finally was fine, and had suffered only one kick. But it took me several hours at the hospital before I could stop asking about Finally. On that dreadful day, he proved to me forever that he is my loyal baby. All he knew was that his mom got hurt and that his job was to stand by and protect me until help arrived. There is truth in that every horse has the power to do great harm, but there is also truth in that every horse has the power to love unconditionally. From the moment he was born, I knew in my heart that this baby horse was special, unfortunately it took a bad accident for the rest of the world to see I was right.